When Is the Best Time for a Child to Learn a Second Language? 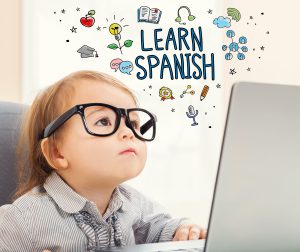 We live in a global community, with electronics and the internet connecting us more closely than ever before. Our communities are no longer contained within neighborhoods or cities but consist of millions of people throughout our country and countries all over the world. Foreign language skills are more important now than they’ve ever been before.

Many parents find themselves thinking about how nice it would be for their children to learn a foreign language. But what age should they start learning? Is there such a thing as being too young to learn? Should you wait until they’re older? But how old is too old? Today, we’d like to share with you the recommended age for children to start learning a foreign language and ways you can help them learn at home.

What Age Should A Child Learn a Foreign Language?

Research conducted by Dartmouth College1 revealed that the brain changes after the teen years. This is one of the reasons it is so challenging for adults to learn a new language. Children, however, are able to recreate new sounds and adopt pronunciations more easily. In fact, the younger the learner, the more quickly they tend to pick up new sounds and words. In addition, children are not filled with the self-doubt that tends to plague older learners. They are not afraid to mispronounce a word or worried about being embarrassed if they make a mistake. Learning is simply a less stressful activity for young children than it is for teens and adults. This goes a long way when it comes to learning a new language.

Benefits of Learning a Foreign Language

In addition to the academic advantages of learning different languages, children also benefit through:

The benefits of learning different languages while young will stay with your children throughout various stages of their lives and give them an edge in a culturally diverse workplace.

Ways to Help at Home

As a parent you may wonder what you can do at home to help encourage your child to learn a second language. There are many means of incorporating foreign language into your routine in a fun, interactive way. For example, many bookstores and libraries have a section of children’s books in other languages, such as Spanish or French. Many of these books have English text alongside or underneath the foreign text. Children don’t have to understand all of the words in order to follow the story. They can learn the words for girl, boy, dog, toy, etc. just by associating the pictures they see with the foreign language words.

Other fun methods of incorporating foreign language into your routine include:

It is natural for young children to be curious. They are always learning, observing the world around them and taking things in. Including fun foreign language activities at home is a great way to help your kids learn a new language and gain exposure to a new culture.

Is Your Child Ready to Learn a New Language?

Kindergarten – 2nd Grade
The Kindergarten through Second grade students’ format of instruction at this grade level is called “FLEX” (Foreign Language Experience or Exploratory). The main goal is to provide students with a foundation for foreign language study. This includes introducing basic sounds and phrases in order to sharpen listening skills and familiarize students with the notion that thoughts can be expressed in another language. Kindergarten through Second grade students attend Spanish class once per week for 30 minutes.

3rd & 4th Grade
Third and Fourth grade students’ format of instruction is called “FLES” (Foreign Language in the Elementary School). FLES programs focus less on the teaching of grammar, and more on the development of listening and speaking skills and on cultural awareness.

5th Grade
Spanish is offered at this level, one time per week throughout the school year. The main focus of the class is to introduce students to vocabulary, pronunciation, basic conversation and culture.

6th – 8th Grade
Sixth and Seventh students are offered Spanish three times per week throughout the school year. Eighth grade classes meet four days per week for a full class period. The main objective of the class is to aid the students in developing proficiency in listening, reading, speaking and writing skills.

1. “The Best Age for Kids to Learn a Second Language” Parent.co https://www.parent.co/the-best-age-for-kids-to-learn-a-second-language/ ↩

2. “The Best Age for Kids to Learn a Second Language” Parent.co https://www.parent.co/the-best-age-for-kids-to-learn-a-second-language/; “Enhancing and Practicing Executive Function Skills with Children from Infancy to Adolescence” Harvard.edu http://developingchild.harvard.edu/wp-content/uploads/2015/05/Enhancing-and-Practicing-Executive-Function-Skills-with-Children-from-Infancy-to-Adolescence-1.pdf↩